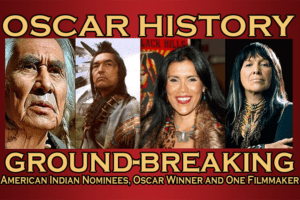 Two Nominations, One Oscar Win, and One short-listed for an Oscar in the 90 year history of The Oscars:
* Chief Dan George for best supporting actor in 1970 [Little Big Man]
* Buffy Sainte-Marie for best song in 1982 WON [Up Where We Belong]
* Graham Greene for best supporting actor in 1990 [Dances with Wolves]
* Joanelle Romero short-listed for an OSCAR 2000 To date the only Native filmmaker to make the preliminary Documentary Short Branch [American Holocaust: When Its All Over I’ll Still Be Indian] This film is the only film that exists that addresses the American Indian and Jewish Holocausts. Romero is the first Native filmmaker to receive in 2005 the Armin T. Wegner Humanitarian Award for “the vision to see the truth and the courage to speak it.”