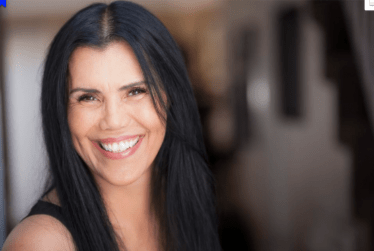 Welcome to the fifth installment of Los Angeles Hashtags Herself. As you know, this spring series highlights the work that remarkable Los Angelenas do in support of social justice and community-making. For the latter half of the season, we are looking at how art, public activism, and the digital age converge. In this week’s guest, they coalesce in one woman, the Native American award-winning film director and producer, actor, singer/songwriter, author, and founder and CEO of multiple media organizations, humanitarian Joanelle Romero.

Joanelle was born in both the artistic and activist worlds and has spent her life bringing those two realms together. As a result, Joanelle has been the “first” and “only” at many points of her life. A (very) few examples: she was the first Native American woman to play a contemporary American Indian role in 1977’s A Girl Called Hatter Fox, was the first Native woman to receive the Armin T. Wegner Humanitarian Award, and remains the only American Indian producer/director to be considered for an Oscar nomination for the excellent and devastating short documentary American Holocaust: When It’s All Over, I’ll Still Be Indian, an unflinching film that makes explicit the link between the US government’s 19th century genocide of American Indian tribes and Hitler’s later eradication of Europe’s Jews. For this contribution, Joanelle was made lifetime member of the Academy of Motion Picture Arts and Science.

Listen to Joanelle share stories about her many years of being an artist and humanitarian, and from where she draws all the necessary strength in a climate where the Native American—and especially the Native woman—is absent from virtually all popular media. As she explains, “I have the strength of my ancestors and I really, really know I am divinely guided with them. And it is a spiritual thing. I do have moments when I want to go, ‘Oh, just forget it,’ but what’s that about? I’ve been given this gift. And to me, it’s a gift.” With this gift, Joanelle amplifies the Native voice through film and television-based storytelling, which “has the power to change your life, and to open up your heart and see someone else’s life and experience.” In this way, Joanelle fosters and nourishes what she considers to be “the core of the human condition,” inclusiveness, belonging, and community.

A million thanks to Joanelle for sharing her remarkable stories and to you for listening. Leave us a review on your favorite podcatcher and connect with us on Twitter (Bedrosian, me), Facebook, or email.

Do subscribe to Red Nation TV so you can watch American Holocaust: When It’s All Over I’ll Still Be Indian. As a teaser, here is Joanelle singing the song she wrote for the film.

LA#Herself is produced by Aubrey Hicks, Jonathan Schwartz, and myself and mixed by Corey Hedden. Stream the interview on this page, or you can download it and subscribe through ApplePodcasts, Soundcloud, or GooglePlay.