Red Nation Celebration Institute’s POV on the COVID-19 pandemic, and finding new ways to the new normal. Collectively, we are all learning new ways to relate and adjust to this ‘new normal’ with this devastating pandemic. Our Indigenous nations, communities, and families have been greatly impacted. As a pioneer Native-led enterprise, Red Nation Celebration Institute (RNCI) is the longest standing and largest Native Arts & Cultural nonprofit organization in the City of Los Angeles, uplifting Indigenous creatives in the entertainment industry to the world. It is RNCI’s responsibility to continue to pave the way for future generations.

RNCI moving forward … Red Nation Celebration Institute began adjusting to this ‘new normal’ in mid-March just like all other arts and cultural organizations around the world. Some organizations are adapting but unfortunately, some have had to close their doors. During this unprecedented time, RNCI programs will not be held face-to-face this year however RNCI is moving forward with scheduled annual our programs which include the annual Red Nation International Film Festival; RNCI Awards Ceremony; Native Women in FILM Film Festival, educational programs, masterclasses; fellowships and filmmaking labs. 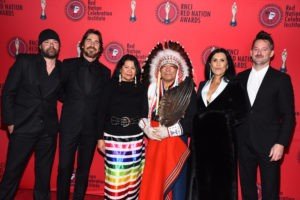 Representation Matters: Native peoples are the original storytellers. They are known for sharing their stories orally. Most of our history has been passed down in this way. Today, we communicate digitally. Red Nation Celebration Institute’s 25th Anniversary and its programs will be ‘Virtual’ in 2020-2021.

RNCI empowers Indigenous filmmakers. RNCI is known for ground-breaking initiates and programs like the first Native film festival in Los Angeles, to the only Native Award ceremony broadcast live annually; to putting Native artists on the ‘Red is Green’ carpet;  introducing A-listers and influencers to Indigenous talent; to supporting our Native Youth Matter – If I Can See It I Can Be It  on and off the reservations. RNCI launched its media broadcast company in 2006 ‘Red Nation Television Network’ – Native is Here, an online streaming media company dedicated to the Indigenous content — before Netflix or any company was streaming online.

RNCI is excited to roll out its first program since the lockdown and shelter in place. This Monday, July 13th, 5pm – 7pm PST.

Next generation of learners: this will be RNCI’s first campaign in its 25 year history – raising the needed funds for the arts. Within the National funding sources 3% goes towards the arts, out of that 1% goes towards Native communities, out of that 1% most of it goes to Native health.  In collaboration with the Bedrosian Center at USC Price School of Public Policy, Red Nation Celebration Institute launched an Study Lesson Guide to complement a new ground-breaking series of film and conversation series for Educators to uplift authentic, accurate, and contemporary representations of Native Americans.

There are over 600 Native Nations in the United States including 573 sovereign tribal nations and an additional 63 “state recognized tribes.” Tribal governments exercise jurisdiction over lands that make Indian country the fourth largest state in the nation. For the last 25 years, Red Nation Celebration Institute has amplified Native Voices at the forefront of the entertainment industry and throughout the country. However, more work needs to be carried forward to share knowledge and information within educational institutions throughout the country. All too often, education from K-12 through university do not have curriculum featuring the history of the peoples on the continent before colonials. Through our new initiative film program and conversation on The American Holocaust from the Native Prospective , a series of conversations series we will discuss some of the biggest issues in Indian Country – and in the United States. Scheduled programing Season 1:  Episodes 1-5; Season 2:  Episodes 1-5; Season 3:   Episodes 1-5; Season 4:   Episodes 1-5; Season 5:   Episodes 1-5  will have supplementary lesson plans, students, teachers and parents alike will learn about Indigenous peoples past and present.

Stay Connected. In the coming weeks, we will begin to roll out this year’s ‘Virtual’ annual RNCI Red Nation International Film Festival. November 1-15.

Red Nation Celebration Institute the Authentic Voice of American Indian & Indigenous Nations, to increase visibility of independent filmmakers, media artists and content creators amplifying cinematic excellence with an emphasis on initiatives for Native women, girls and youth in all media platforms and educational institutions, in conjunction with partners from around the world.