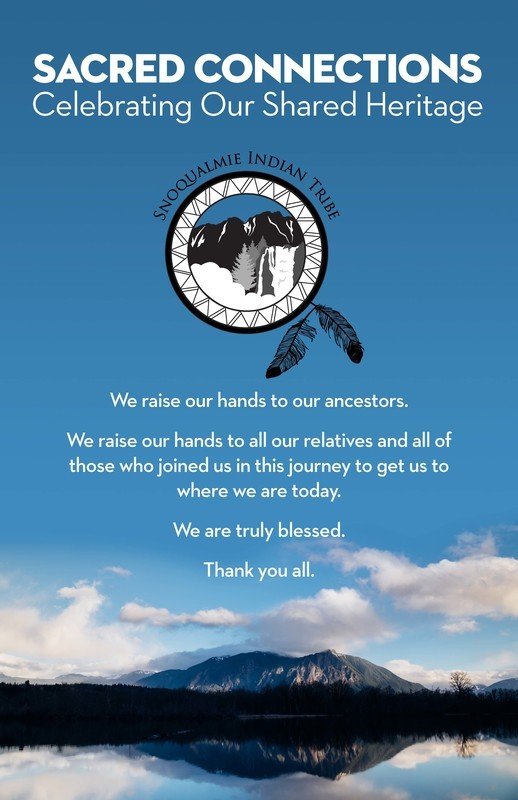 As Snoqualmie People, for time immemorial we have lived, fished, hunted and gathered on and stewarded lands that are now known as Washington state. Almost 100 years after Snoqualmie and others signed the Treaty of Point Elliott of 1855, and promises were left unfulfilled, the federal government claimed Snoqualmie was an unrecognized tribe, abandoning their trust responsibility. For nearly 50 years after, the Snoqualmie Tribe fought for our federal recognition status to be restored which was successfully finalized in 1999. This 18-minute documentary, produced for the 20th Anniversary of our Re-Recognition, chronicles that fight through interviews with Tribal Elders past and present, Spiritual Leaders, and a rising generation of young Snoqualmie tribal members who are carrying forward the teachings of our ancestors. While honoring the land and natural gifts that have always been the source of life for the People, Sacred Connections tells the story of how the Tribe’s devoted members came together in resistance to injustice and pushed through obstacles at every level of the federal recognition process to re-establish the acknowledgment of our continued existence in the heart of our homelands and usher in a new era of connection with the land and each other.

Our hands go up to all who were involved in Snoqualmie’s historic Re-Recognition effort and in conceptualizing, filming, and producing this film.