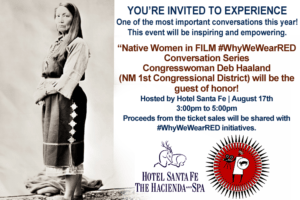 YOUR INVITED TO EXPERIENCE! One of the most important conversations this year! This event will be an inspiring and empowering.“Native Women in FILM #WhyWeWearRED Conversation Series Congresswoman Deb Haaland (NM 1st Congressional District) will be the guest of honor. Joanelle Romero actor, founder of RNCI Red Nation International Film Festival,  Native Women in FILM #WhyWeWearRED, Academy of Motion Picture Arts & Sciences, currently the only Native filmmaker to be short-listed for an Oscar.

Stay Connected more TBA!…. Proceeds from the ticket sales will be shared with #WhyWeWearRED initiatives.