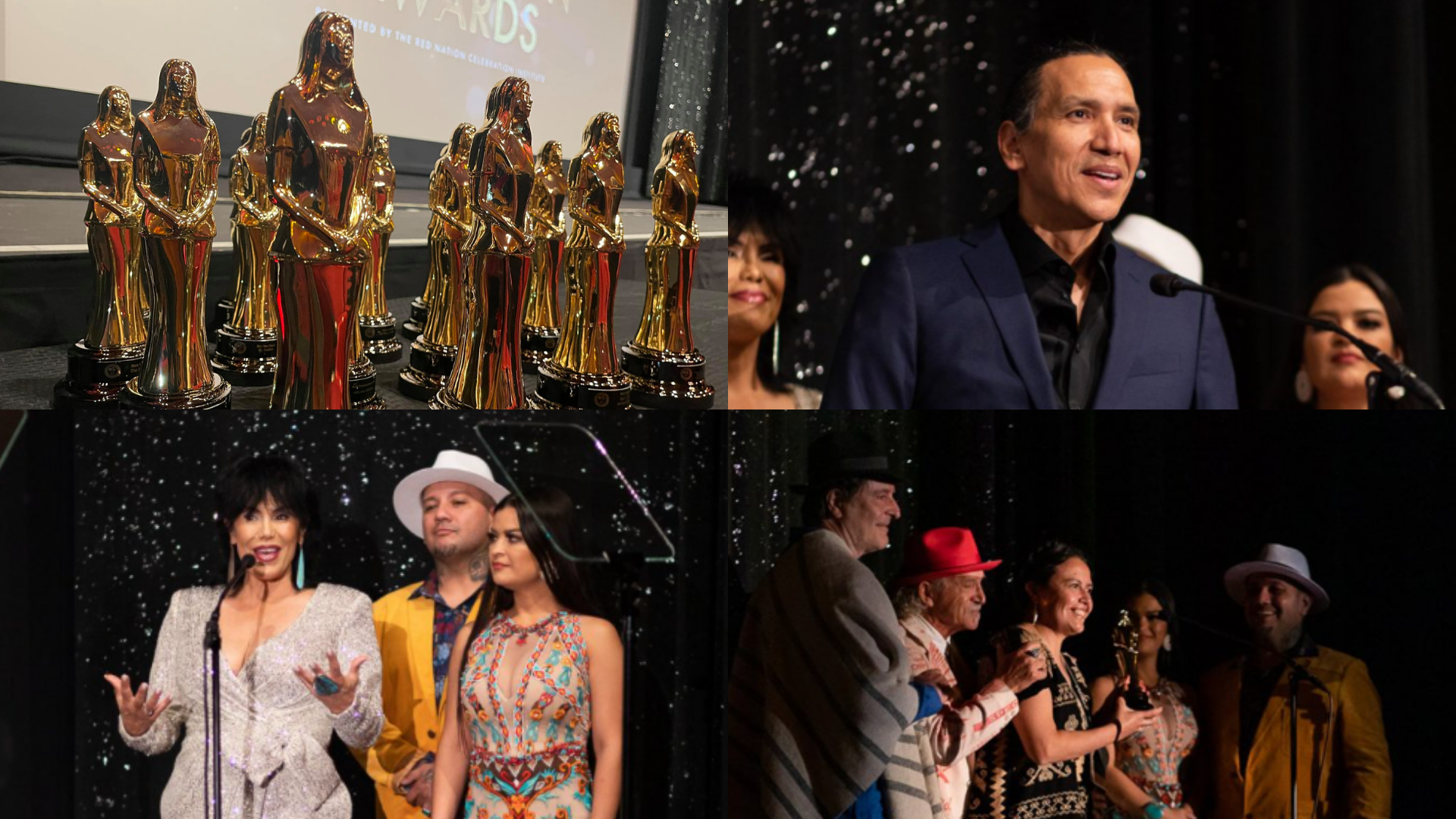 The 2021 RNIFF welcomed guests, press, industry, stars highlighting Native Indigenous voices, stories, filmmakers, producers, and writers back to the city of Los Angeles and into cinemas. RNIFF secured Night Raiders before it’s U.S. theatrical release at this year’s 26th Red Nation International Film Festival (RNIFF); the film is gaining international recognition for its futuristic storyline that is based on the realities of residential school horrors of the past.

“RNIFF hopes for Night Raiders to become a Top 10 Hit this year affirming its status as a major player to contend in the 2022 Oscars race. Being a curator of film for 44 years, I can say this film has it all.” said Joanelle Romero, RNIFF CEO President Founder. “Native Women in Film take the lead at RNCI Red Nation Awards Ceremony, held this past Sunday, November 14th in Beverly Hills. Night Raiders picked up Best Picture, Best Director, Outstanding Actress in a Leading Role and Outstanding Actress in Supporting Role.”

Michael Greyeyes was also a big winner at the RNCI Red Nation Awards Ceremony, which wrapped up the 26th edition of the festival, claiming its Actor Award.

This year’s RNIFF and Awards Ceremony was irresistible, ceremonial in the highest regard to Who Tells the Story Matters. The RNIFF is not over yet, we continue with online screenings and free events; filmmaker conversations, Q&As, red carpet photos and exclusive interviews with the stars and filmmakers here.

Red Nation Celebration Institute (RNCI), The Authentic Voice for American Indian & Indigenous Nations, founded 1995. The Creative Enterprise by Natives delivering to all people the stories that shape our world.  The longest standing Native Women-Led, Indigenous media arts cultural pioneer nonprofit enterprise in Los Angeles, offices in Santa Fe NM, serving Indian Country & Entertainment Industry, representing 570+ Native Nations, established a rich legacy of work by supporting 739+ Native Indigenous filmmakers. Mission is to break barriers of racism by creating systemic change through media and pop culture in order to eliminate Native American stereotypes. Our Vision for the future of cinema is one in which Native Indigenous perspectives are authentically pictured, recognized, and valued in a way that promotes strong authentic Native identities, economic outcomes, equity, and wellness for our Indigenous communities. rednationff.com/board-of-directors/

American Indian Heritage Month in the City of Los Angeles

The HISTORY of ‘American Indian Heritage Month’ in the City of Los Angeles and the State of New MexicoRed Fox James, Niitsitapi, Blackfoot, rode over 4,000 miles on horseback from state to state seeking approval for a day to honor Native Americans.

~ On December 14, 1915, he presented the endorsements of 24 state governments at the White House. Red Fox James Born about 1884 in Blood Indian Reserve No. 148, Alberta Canada was a supporter of giving women the right to vote, because “In the early days, before the white-man came, the Indian women had equal voice in the council, and even was elected chieftain…”

~ Joanelle Romero, CEO/Founder Red Nation Celebration Institute, born of Mescalero-Chiricahua Apache, Dinétah, Paiute, and SpanishSephardic. A relative of Pawnee, Pojoaque, Southern Ute, Lakota and Haudenosaunee was so inspired by Red Fox James … that she worked hard for five straight years (2000 to 2005) with the former DCA/LA Manager Marjorie Reese to get American Indian Heritage Month (AIHM) established in The City of Los Angeles (officially recognized by the City of Los Angeles in 2005 with a proclamation). AIHM was officially recognized by the State of California in 2006 with a Resolution given to Red Nation Celebration Institute by the State of California Gov Schwarzenegger and Lt Gov Bustamante.

2006 City of Los Angeles Mayor’s Reception was produced by Red Nation Celebration Institute. Local Tongva Spiritual Leader Jimi Castillo officially recognized Joanelle Romero as “the First Lady of American Indian Heritage Month” for all Red Nations, due to her vision in founding and establishing the American Indian Heritage Month in the City of Los Angeles in 2006, in addition because she had succeeded in unifying the interests of 19 tribes in the Los Angeles area.

In 2007, when environmental consciousness came more clearly into the hearts and minds of Americans, RNCI founder Joanelle Romero was already breaking new ground by dedicating the City’s second annual American Indian Heritage Month to “Honoring American Indians as our Nation’s First Environmentalists.”In 2008, RNCI founder Joanelle Romero worked with the State of New Mexico with former Gov Richardson and Dept. Indian Affairs, in officially recognizing American Indian Heritage Month in the State of New Mexico, with a letter of recognition by Gov Richardson and Dept. Indian Affairs.

ABOUT RNCI Founder Joanelle Romero (Mescalero Apache) is CEO, Founder and President of Red Nation Celebration Institute and Red Nation International Film Festival.  A member of the Academy of Motion Pictures Arts & Sciences and the only but not the last Native Indigenous filmmaker to be short-listed for an Academy Award. Joanelle is deeply committed and driven to amplifying Native-Indigenous Storytellers in mainstream media worldwide. Through Red Nation Celebration Institute, now in its 26th year, representing over 570+ Native Nations, Joanelle has mentored more than 839 Native Indigenous filmmakers through the Institute’s labs and fellowships, has curated some 5000+ movies written, produced and directed by Native Indigenous people that premiered at the Red Nation International Film Festival and streamed through her Red Nation Television Network. Joanelle works with a respected board of directors, advisory board and leaders both native and allies in pop culture, media and social justice with an emphasis of Native Women and girls and Native youth.  Joanelle is an accomplished media proprietor, her career spans over forty-four years in the entertainment industry as an acclaimed actress in film and television, Award-winning director, producer, writer, marketer, film distributor, recording artist, singer/songwriter and humanitarian. Joanelle is born of Mescalero- Chiricahua Apache, Dinétah, Paiute and is Spanish- Sephardic. A relative of Pojoaque, Pawnee, Southern Ute, Haudenosaunee and Lakota. Her Native Indigenous name is ‘Oyate Wayanka Po Win – People Who See This Woman’. To learn more visit: www.joanelleromero.com/Resume.pdf