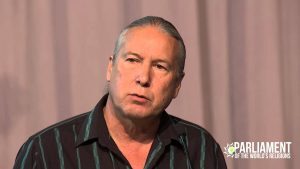 These issues remain relevant today, and as more insidious forms of discrimination infiltrate the national culture, this Intimate UpClose & Personal Red Nation Conversation Series* will be an opportunity to go deeply into this topic with filmmaker Steven Newcomb. Limited seating!

Steven Newcomb is a Shawnee, Lenape scholar and author. He is co-founder and co-director of the Indigenous Law Institute. He has been studying and writing about U.S. federal Indian law and policy since the early 1980s, particularly the application of international law to indigenous nations and peoples.

He is published by Wiley-Blackwell (Oxford), Routledge, New York University School of Law, Fulcrum Publishing, the University of California at Los Angeles School of Law, and the Griffith School of Law in Australia. His book *Pagans in the Promised Land: Decoding the Doctrine of Christian Discovery*, has been a best seller on Amazon for eight years, he is co-producer of the movie *The Doctrine of Discovery: Unmasking the Domination Code*, directed by Sheldon Wolfchild (Dakota). On May 4, 2016, he met Pope Francis at St. Peter’s Square and spent two hours meeting with
Archbishop Tomasi at the Pontifical Council for Justice and Peace regarding the papal bulls of the 15th century.