#WhyWeWearRED A Global Call to Action and Media Coalition initiative that aims to bring awareness to Murdered and Missing Indigenous Women & Girls and the lack of inclusion of Native Women in Film & Television.

Violence against Native women has reached epidemic proportions. Four in five Native women will be the victims of violence during their lifetimes.  Native women remain the most underrepresented minority in the industry.

“We are going into our 16th year of lack of inclusion of Native actresses on episodic television,” – stated actress, founder of Native Women in FILM, AMPAS member, “16 years since America has seen a native actress on television in any role, be it star, guest star, co-star, or extra etc. #TimesUP.  When we don’t see Native Women in media and we are not seen in the big picture that implies we don’t matter, our lives don’t matter. I am a survivor of sexual assault. I was kidnapped held hostage for over a week, drugged to unconscious and after about 10 days at a moment of conscious I begged them to let me go. I am here to tell my story and speak for the ones who can’t — Not One More Stolen Sister.”

Why We Wear RED and its Media Coalition is an advocacy group working to promote freedoms for Indigenous Women, ensure their human rights, and protect American Indian culture and the environment.

Why We Wear RED Media Coalition

Why We Wear RED Philanthropy 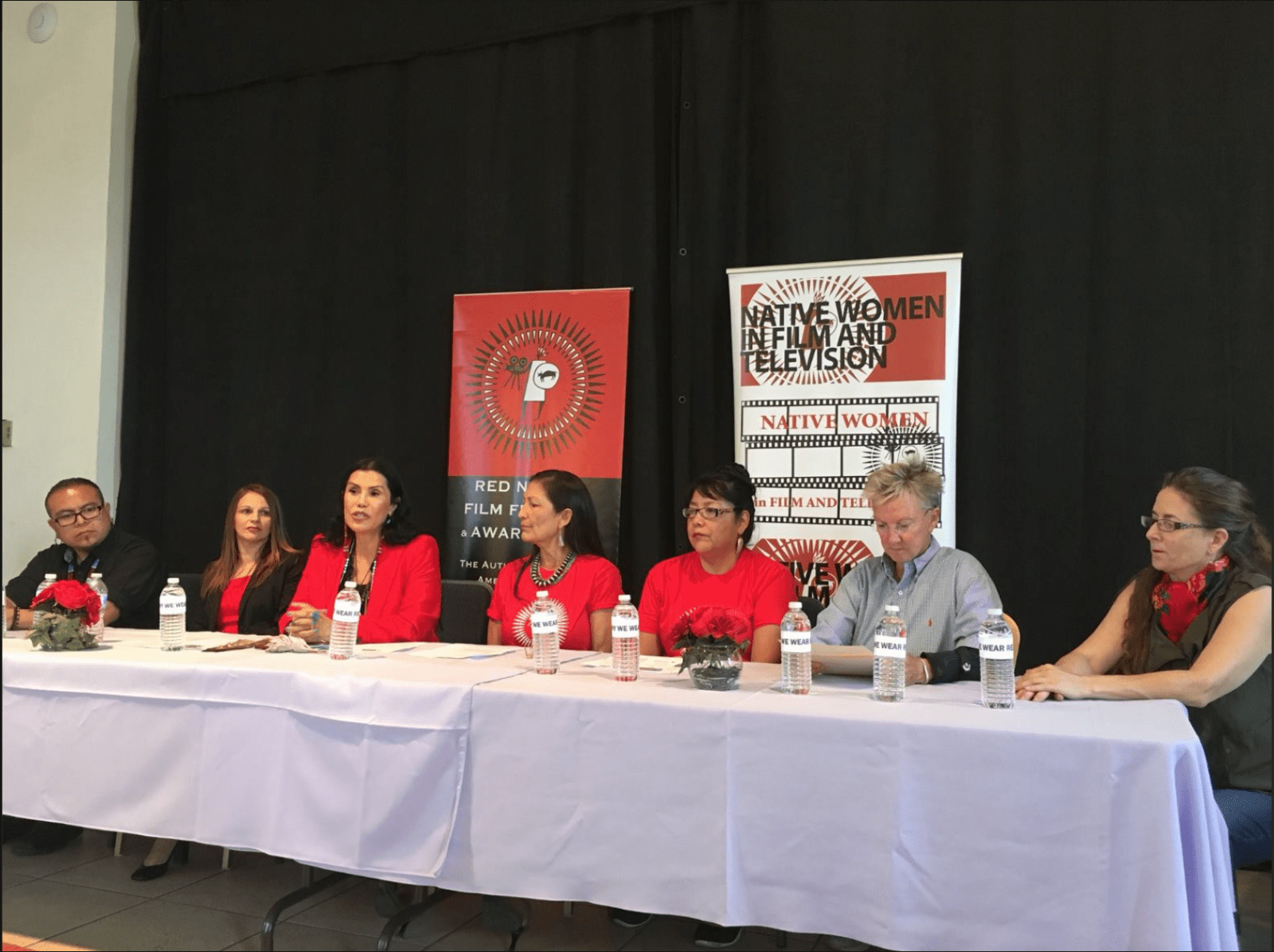 Native Women in FILM *Why We Wear RED* had its first press conference, August 14th, 2018 in Santa Fe NM. Santa Fe is the oldest capital city in the United States and the oldest city in New Mexico. 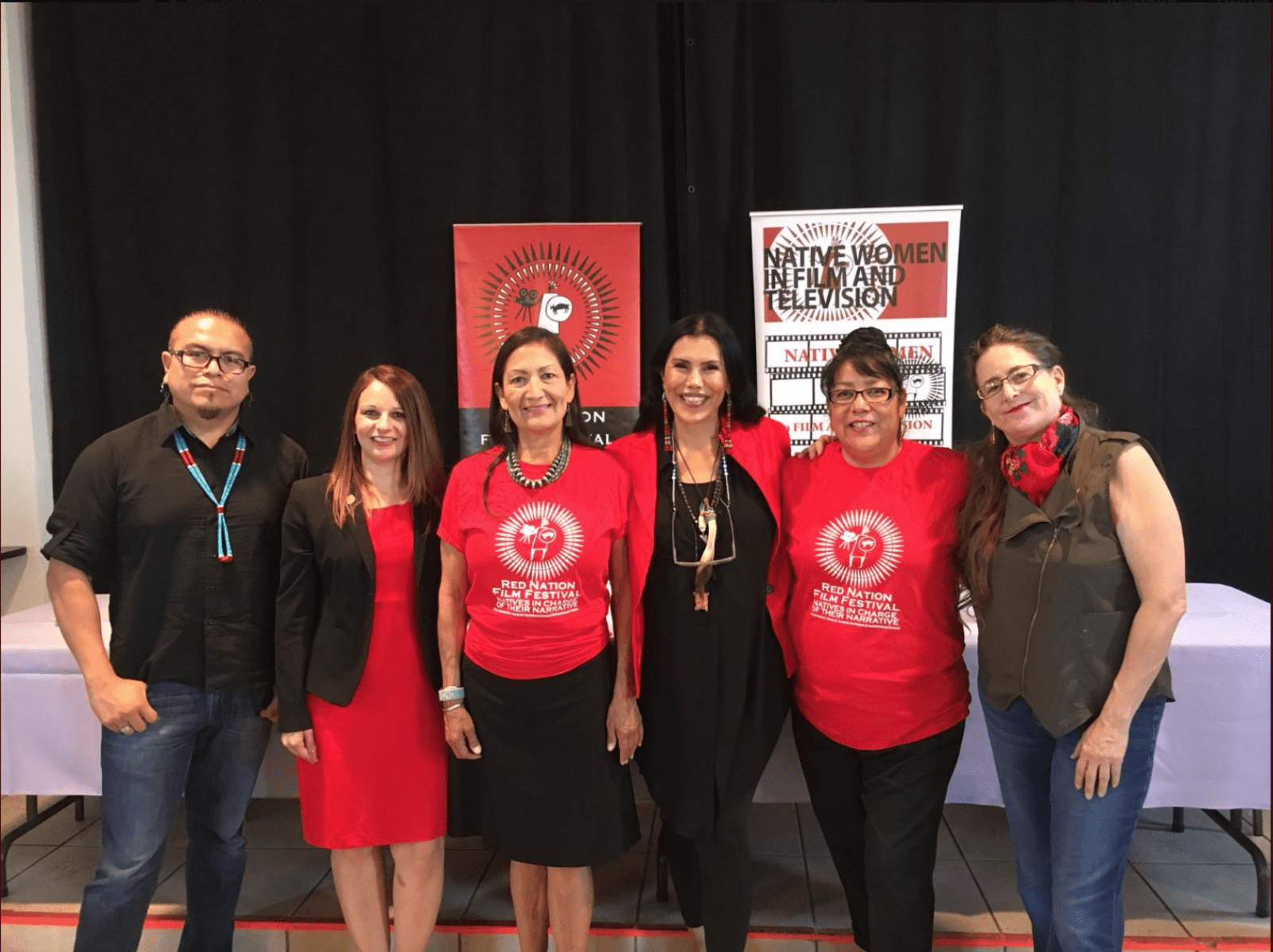 Do YOU Know #WhyWeWearRED Brings Awareness!

Native Women in FILM encourages supporters everywhere to wear RED and/or share our hashtag #WhyWeWearRED as a show of unity, empowerment and to help find our Stolen sisters.

Your Call @yourcallradio
@NDNCinema Joanelle Romero: “Our youth don’t see themselves. Just being human on mother earth, you have to ask yourself: if our children aren’t seeing themselves represented in a positive way, what does that tell them? It tells them they don’t matter”

“Our women have always been the leaders. We’re the life givers, the nurturers of our communities & our families. #Timesup, You can’t get rid of us. We’re here to stay. Our ancestors are walking with us & holding us up.” @NDNCinema Joanelle Romero #MMIW

“America has not seen a Native actress on episodic television for 15 years. We’ve been completely written out of the narrative. Because of that, we created #whywewearred. It’s taken centuries to get to this point.” @NDNCinema Joanelle Romero on Your Call: http://kalw.org/post/raising-awareness-about-missing-and-murdered-indigenous-women-us#stream/0

Please raise awareness of the Murdered & Missing Women and the lack of inclusion of Native Women in Film & Television by sharing:

FACEBOOK | SHARE & GET INVOLVED https://www.facebook.com/events/158485821480888/?active_tab=discussion
SUPPORT & Join others on #WhyWeWearREDGlobal campaign by using #WhyWeWearRED on your hand & post it ON OUR FACEBOOK PAGE  https://www.facebook.com/events/158485821480888/
Visit our Other pages to lean more#WhyWeWearRED
http://nativewomeninfilm.com/murdered-missing-native-women/
#WhyWeWearRED Supporters http://nativewomeninfilm.com/whywewearred-supporters/
Native Women in FILM encourages supporters everywhere to wear RED and/or share our hashtag #WhyWeWearRED as a show of unity and empowerment.

There are over 2,500 MMIW that have been counted.We are attempting to list one sacred life giver each day. http://nativewomeninfilm.com/murdered-missing-native-women/
Facts:

One might describe our story as the longest running #MeToo movement in U.S. history; our movement, however, predates social media by about 150 years.

According to findings in the 2016 National Intimate Partner and Sexual Violence Survey by the National Institute of Justice, 84.3 percent of Native women experience violence in their lifetimes; 56.1 percent are victims of sexual violence.

2016 National Institute of Justice statistics back up their complaints:

* More than 4 in 5 American Indian and Alaska Native women have experienced violence in their lifetime. That includes sexual violence, physical and/or emotional aggression by a partner, and stalking.

* Alaska Native women endure the highest rate of forced sexual assault and fall victim to domestic violence at a rate 10 times higher than anywhere else in the United States.

* Ninety-six percent of Native American victims of rape or sexual assault are attacked by non-native assailants.

Efforts to combat sexual violence against Native American women are underway, including three bills aimed at directing more resources to victims of crime in Indian Country, ensuring tribes have access to federal criminal databases, requiring more data collection on Native human trafficking victims and initiating a national dialogue on missing and murdered Native women.One of the bills, known as Savanna’s Act, responds to growing concerns about the large numbers of missing and murdered Native women. Data is scarce, partly because the Department of Justice has never been required to track the data, but Sen. Heidi Heitkamp (D-North Dakota) – who introduced the bill – said more than 5,700 cases of missing Native women were reported in 2016 alone.”The actual number is likely much larger, due to chronic under-reporting,” she said during a Senate Committee on Indian Affairs hearing in October on the three bills.

ABOUT: Native Women in FILM

Native Women in FILM & Television. A Global Campaign initiative that aims to bring awareness to the Lack of Inclusion of Native Women in Film and Television, Murdered and Missing Indigenous Women & Girls, Climate Justice, Human Trafficking, Sexual Harassment, Assault, Inequality for women in all kinds of workplaces. Violence against the land is violence against women.

Native Women in FILM *Why We Wear RED* had its first press conference, August 14th, 2018 in Santa Fe NM. Santa Fe is the oldest capital city in the United States and the oldest city in New Mexico.

Why We Wear RED and its National Media Coalition is an advocacy group devoted to securing the freedoms, human rights, protecting American Indian culture and the environment while increasing and improving portrayals of American Indian & Indigenous women in the media, including advocating for communications policies.

Why We Wear RED founded on January 7, 2018, by actor/director/founder/humanitarian Joanelle Romero of Red Nation Celebration Institute (RNCI), is the longest standing Native Arts & Cultural nonprofit organization based in Los Angeles, with an office in Santa Fe New Mexico, with strong bases of support in North America and Europe.