Advisory and Honorary Board

Pearl Daniel-Means (Diné) Born into the Ashiihi (Salt) Clan of the Navajo Nation, Her Lakota name, Iyoyanbya Izanzan Win, translates loosely to “Bright Light.”
Means walked alongside the late American Indian activist, author, artist, and actor Russell Means, as his wife, business manager, and collaborator. She was chair of the T.R.E.A.T.Y. Total Immersion Educational Endowment Fund from 2012 to 2020. In this capacity, she worked tirelessly in support of Indigenous culture, arts, education, and spirituality.

Means is co-producer of the feature documentary END OF THE LINE: THE WOMEN OF STANDING ROCK. Her film won at Red Nation International Film Festival in 2016 and received ‘Best Doc Short’ at the RNCI Red Nation Awards.

Osage, Cherokee, and Lakota. Traditional ceremonial leader, actor and stuntman who played the leading Indian role Cloud Dancing (for which he received an Emmy nomination for Best Supporting Actor) in the popular series “Dr. Quinn, Medicine Woman”. While on Dr. Quinn, Sellers is credited as the show’s Native American Consultant. His other roles were The Naked Indian spirit from Wayne’s World 2.

“In the Iroquois way, it was decided by the women (Clan Mothers), who were responsible for the political, social and spiritual welfare of our people. They inspired the Women’s Suffragette movement and were responsible for choosing the leaders and taking them out of office. To this day, we remain ever vigilant of our place upon mother earth as we considered “Lifegivers”. It is our responsibility to ensure that our children have clean air and water. It is up to us to provide them with a better earth than we found it unto the seven generations.”

Served on the RNCI Native Women in Film & Television in All Media – Media Coalition Board from 2018 to 2021.

A medicine man and spiritual leader. Through his writings and teachings, he has sought to unify Indian people of all nations. As a practitioner of traditional herbal medicine and a leader of Sun Dance ceremonies, Crow Dog was also dedicated to keeping Lakota traditions alive. Red Nation Celebration Institute is the only organization that Leonard Crow Dog was involved with.

Actor, activist for the rights of Native Americans, libertarian political activist, writer and musician. He became a prominent member of the American Indian Movement (AIM) after joining the organization in 1968 and helped organize notable events that attracted national and international media coverage.

Means was active in international issues of indigenous peoples, including working with groups in Central and South America and with the United Nations for recognition of their rights. He was active in politics at his native Pine Ridge Indian Reservation and at the state and national level.

Beginning an acting career in 1992, he appeared on numerous television series and in several films, including The Last of the Mohicans and released his own music CD. Means published his autobiography Where White Men Fear to Tread in 1995.

Best known for his role in “Butterflies are Free” In more recent years he served on the California Coastal Commission and California Native American Heritage Commission.

The son of actor Eddie Albert and Mexican actress Margo, he starred opposite Goldie Hawn in Butterflies Are Free (1972), a role for which he won a Golden Globe Award for New Star of the Year. He was nominated for Best Actor in a Motion Picture – Musical or Comedy. Albert starred in more than 130 films and television series, including Midway, The Greek Tycoon, Galaxy of Terror, The House Where Evil Dwells, The Yellow Rose, Falcon Crest and Power Rangers Time Force.

Crazy Bull graduated from Fort Lewis College with a B.A. degree in Psychology, then earned his Masters Degree in Psychology from UNM. He loved the outdoors, basketball, fishing and camping. He sponsored many spiritual activities.

Served on the RNCI board from 2009 – to date of her passing. 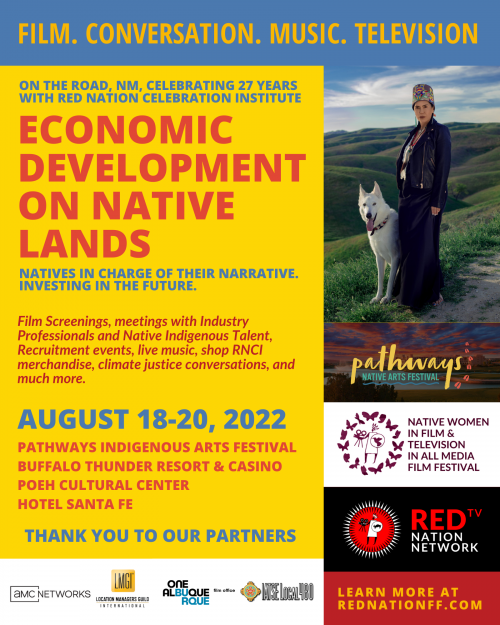